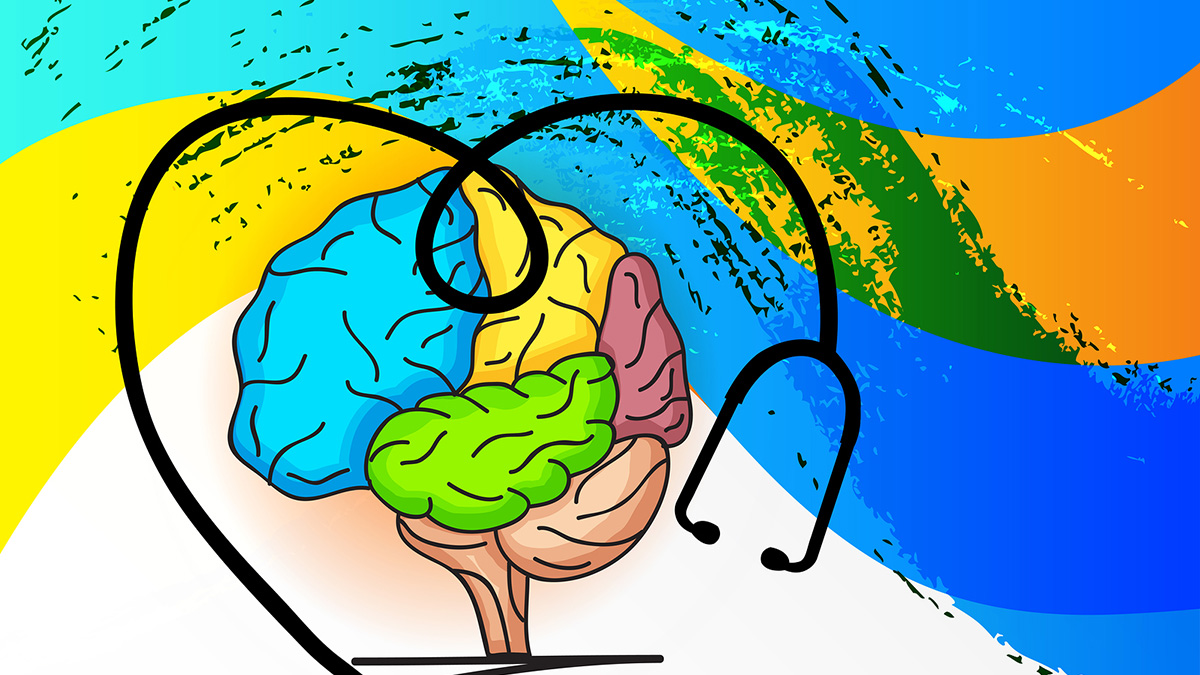 The onset of dementia and Alzheimer’s disease can be a devastating time both for the person facing these illnesses and his or her loved ones. But, while troubling, this doesn’t have to be a time of despair for those afflicted and involved.

“First, don’t panic,” offered Denise Kish, administrator of Mount Pleasant Gardens’ Alzheimer’s Special Care Center. “Many people think they will go from remembering everything to remembering nothing in weeks. Although sometimes this happens, it’s not the norm.”

Her suggestion is for those affected to continue to eat properly, exercise and keep their brain engaged. 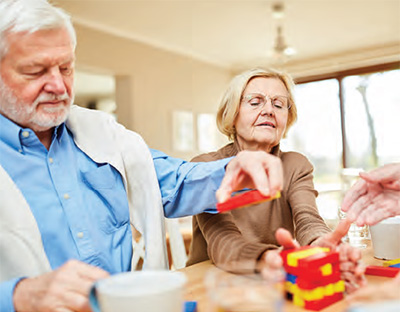 “Read, do games that require strategy and connect with people. Write down your schedule and what you’re doing throughout the day – Where did you go? What did you eat? This keeps you active and helps others assist you when you need help.”

Dr. James Davis, medical director for the Greenville Hospital System’s Memory Health Program, reported that the incidence of Alzheimer’s disease has been declining in recent years, possibly due to advances in the prevention of cardiovascular disease and stroke.

“It is thought that there are common risk factors for vascular disease and Alzheimer’s disease and other causes of dementia,” he said. “There is very limited evidence from prospective studies that exercise, diet or any other intervention can prevent the onset or stop the progression of Alzheimer’s disease. Most studies that attempt to show this are of relatively short duration. It may be that longer intervention trials would show benefit.”

There is optimism that risk factor modification in midlife – between ages 45 and 65 – has the potential to delay the onset of dementia.

“We do recommend daily exercise and lifestyle modifications to reduce vascular risk in all people, regardless of age and in persons who already have Alzheimer’s disease. Lifestyle interventions are helpful for maintaining function and quality of life for everyone as they age,” Dr. Davis suggested.

As Beth Sulkowski, vice president of communications and advocacy for the South Carolina chapter of the Alzheimer’s Association, pointed out, Alzheimer’s is the sixth leading cause of death in the United States and the only leading cause of death without a way to slow, stop or prevent it. That said, there is growing scientific consensus that people can reduce their risk of “cognitive decline” when changes in the brain affect the ability to think or remember.

“Though research is still evolving, evidence is strong that people can reduce their risk for cognitive decline by making key lifestyle changes, such as engaging in regular physical activity and eating a healthy diet,” Sulkowski said. “What’s good for your heart is also good for your brain.”

She added that to learn more, check out the Alzheimer’s Association’s “10 Ways to Love Your Brain,” which stresses the importance of physical activity, diet and watching your health numbers but also includes things like staying social, avoiding head injuries and challenging your brain through puzzles and word games. Visit alz.org/10ways for more information.

Dr. John Absher, a neurologist affiliated with Greenville Memorial Hospital, said that certain individuals are at greater risk for the illnesses, including those with limited education. Those with cardiovascular risk factors, such as smoking, hypertension, diabetes, hyperlipidemia and sleep apnea are at higher risk as well.

“Thus, in racial/ethnic groups with a relatively higher prevalence of such risk factors, the risk of Alzheimer’s is higher than in the groups with lower rates of cardiovascular risks,” Dr. Absher said. “There are certainly genetic risks – for example, Down syndrome, familial Alzheimer’s and apolipoprotein E4 genes. Traumatic brain injury may increase the risk of Alzheimer’s by releasing proteins and other substances that lead to a cascade of neurodegeneration. The details are an active area of research.”

After age 65, the risk of Alzheimer’s doubles every five years, observed Sulkowski.

“After age 85, the risk of developing Alzheimer’s is nearly 1 in 3. Research shows that older Latinos are about one-and-ahalf times as likely as their white counterparts to have Alzheimer’s and other dementias, while older African-Americans are about twice as likely to have the disease,” she said.

The reason for these differences is not well understood, but researchers believe that higher rates of vascular disease in these population groups may also put them at greater risk for developing Alzheimer’s. 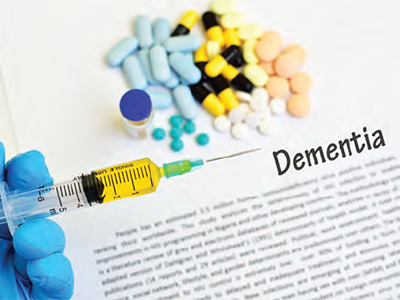 In addition, almost two-thirds of Americans with Alzheimer’s are women.

Sulkowski said, “Women in their 60s are about twice as likely to develop Alzheimer’s during the rest of their lives as they are to develop breast cancer. There is emerging evidence that suggests there may be unique biological factors that contribute to underlying brain changes.”

She said that intensive blood pressure treatment reduces new cases of mild cognitive impairment (MCI) and the combined risk of MCI plus all-cause dementia. A recent study provided the strongest evidence to date about reducing the risk of MCI and dementia through the treatment of high blood pressure, which is one of the leading causes of cardiovascular disease worldwide.

The “Systolic Blood Pressure Intervention Trial” was a randomized clinical trial that compared two strategies for managing high blood pressure in older adults. The researchers found a statistically significant 19 percent lower rate of new cases of MCI in the intensive blood pressure treatment group. The combined outcome of MCI plus probable all-cause dementia was 15 percent lower in the intensive versus standard treatment group.

Sulkowski said that although current medications cannot cure Alzheimer’s or stop it from progressing, they may help lessen symptoms, such as memory loss and confusion, for a limited time.

“The U.S. Food and Drug Administration has approved two types of medications called cholinesterase inhibitors (Aricept, Exelon, Razadyne) and memantine (Namenda) to treat the cognitive symptoms – memory loss, confusion and problems with thinking and reasoning – of Alzheimer’s disease. Doctors sometimes prescribe both types of medications together.”

A growing number of herbal remedies, dietary supplements and “medical foods” are being promoted as memory enhancers or treatments to delay or prevent Alzheimer’s disease and related dementias. Claims about the safety and effectiveness of these products are based largely on testimonials, tradition and a rather small body of scientific research.

“In addition,” Dr. Absher said, “vitamin E in high doses will slow some measures of deterioration, such as institutionalization and death. Physical exercise, a healthy diet, avoiding excess alcohol, avoiding head trauma, getting plenty of sleep and controlling all cardiovascular risk factors are the best strategies we can pursue.”

Dr. Davis pointed to trials that seek to understand the potential benefits of early detection by genetic testing, such as amyloid scans of the brain or spinal fluid examination for abnormal proteins.

Should people be tested for the possibility that they may be facing dementia or Alzheimer’s later in life?

“If a person is currently experiencing confusion or memory loss that is getting worse, it is definitely better to know,” said Sulkowski. “Document your concerns and discuss them with your doctor. Some reversible conditions can mimic cognitive decline, such as depression or a vitamin B12 deficiency. If it does turn out to be Alzheimer’s or related dementia, an early diagnosis leads to better outcomes for individuals with Alzheimer’s and their caregivers. It gives you an opportunity to access available treatments, build a care team, participate in support services and enroll in clinical trials. Early diagnosis also allows individuals with the disease and their caregivers to better manage medications, receive counseling and address driving and safety issues in advance.”

While there is no cure for these illnesses, Dr. Absher remained optimistic. 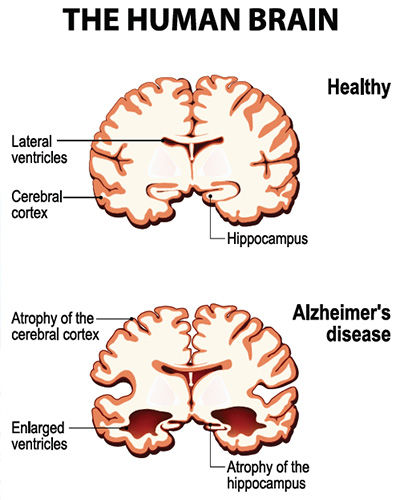 “Tremendous progress is being made. However, there is much to do, and our programs in upstate South Carolina have the potential to contribute in substantial ways to research progress. The South Carolina Alzheimer’s Association has been actively promoting larger budget allocations to research at the national level, and such efforts have been tremendously successful.”

He added, “There are many drug treatments in the pipeline that may reduce amyloid plaques in the brain and improve cognition and function, but research is a lengthy and grueling process. There are many exciting clinical trials currently underway, including some important research right here in South Carolina.”

According to Dr. Davis, Alzheimer’s costs “more to society than either cancer or heart disease.”

He said, “Alzheimer’s and dementia are complex, multifaceted conditions. Older persons with dementia often have multiple pathologies. While I think there will be progress going forward, it will not occur quickly. We already know of some interventions that can delay the onset of dementia, but these require major and ongoing public health efforts to bring about change.”

There is some evidence that this is happening. But the aging of our country’s population means that society will unfortunately be contending with dementia and Alzheimer’s for years to come.

Diet and Staving Off Alzheimer’s

While there is no cure for dementia or Alzheimer’s, having a healthy diet and active lifestyle helps improve the overall health of a person.

“I take care of a lot of older people with various medical issues,” said Dr. John Kleckley, a fellowship trained geriatrician practicing in the Mount Pleasant area of South Carolina, “and I can usually look back on how they lived their lives and I find that their medical problems don’t surprise me. Would I recommend that people have a good diet, eating organic foods, staying away from processed foods or those with a lot of chemicals in them and eat vegetables and fruit? Yes. But I don’t tell them this to prevent dementia of Alzheimer’s. I do this because it will make the person healthier long-term in general.”

Dr. Kleckley, who good-naturedly said that some people refer to him as “Dr. Party Pooper” because of his cautious approach to new “cures” for ailments or illnesses, said, “There is a lot going on out there about the supplement of the week and how it can stave off dementia or Alzheimer’s. But there is no direct evidence to date that any supplements do this. I don’t recommend that somebody spend $150 on a supplement in hopes that it will help. If money is no object, then certainly try it.”

He added, “Again, while there’s no direct evidence linking diet to the prevention or delay of dementia or Alzheimer’s, it makes common sense that the less chemicals and compounds in your food and the more ‘real’ it is the better.” 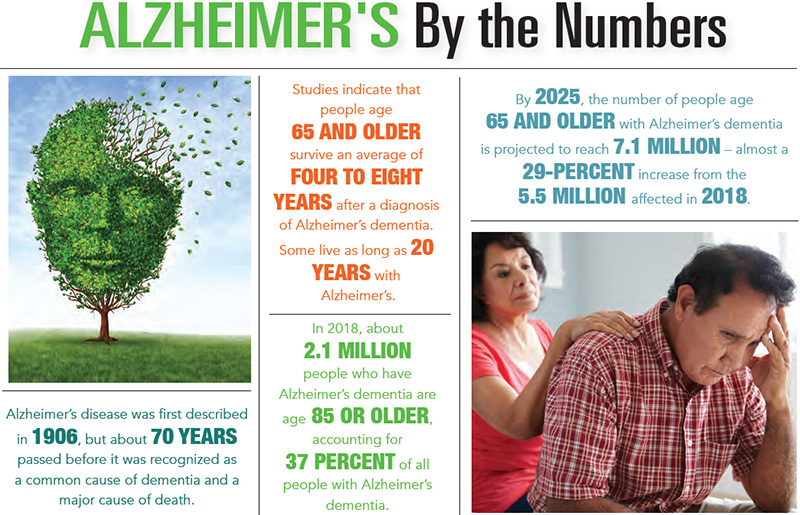 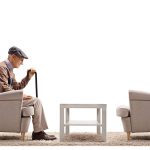 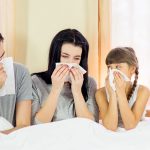 What to Know About Allergies 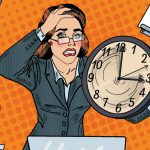 Stress and it’s Effects on the Body 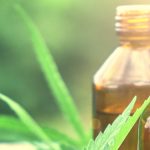